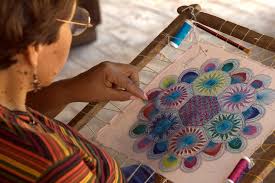 This lecture will examine the myths constructed around the Paraguayan indigenous woman, by examining the use of Ñandutí lace in both artistic practices and nationalist discourse.

Departing from a historical overview of the wars that wiped out an estimated 90% of the country’s adult male population at the end of the nineteenth century, the lecture will address how women took on the heavy task of repopulating the country and rebuilding its economy, while remaining firmly in a subaltern position — one consolidated by the construction of nationalist myths around selfless female labor and hardship.

This dynamic became particularly evident during Alfredo Stroessner’s military regime (1954-1989), which appropriated Ñandutí as an emblem of docile Paraguayan mestizo nationalism. Conversely, the indigenous myths around this lace, and how it was incorporated in artworks by pioneering figures such as Olga Blinder and Josefina Plá (members of the Arte Nuevo Group), bring forth a narrative in which Ñandutí becomes a symbol of emancipation; it carves a space of agency and creativity for the marginalized or othered subjectivities of their makers.