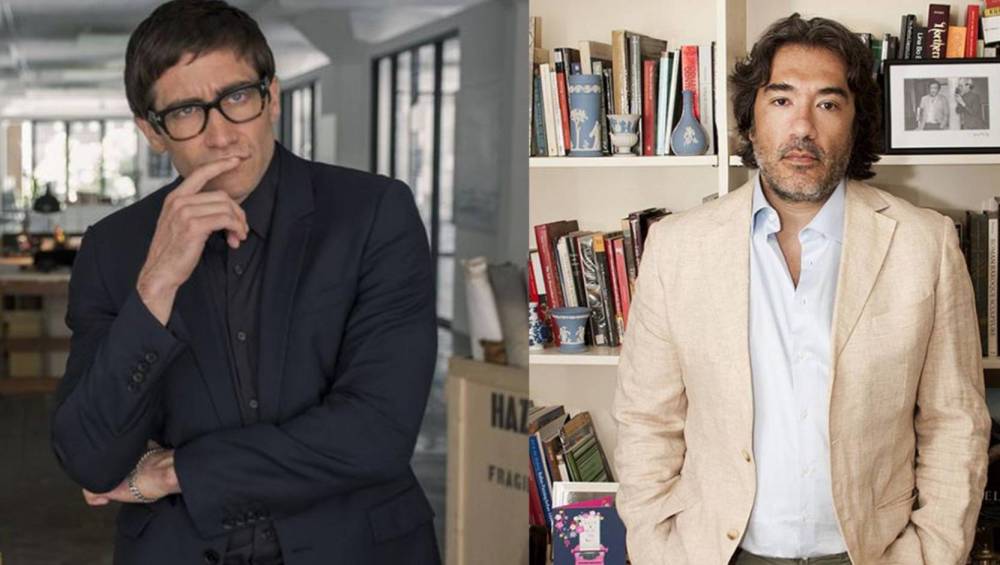 Rodrigo Cañete, a famed Argentinean critic who has lived in Europe for two decades, has as many awards as he has enemies, and he has earned them on merit.

A few days ago, the International Center for the Arts of the Americas at the Museum of Fine Arts, Houston (ICAA/MFAH) decided to award him the prestigious Peter C. Marzio 2020 prize for an essay that Cañete wrote in the 1990s. But a few days ago the institution reversed its decision and announced in a press release:

“As announced by the ICAA last March 30, the 2020 Peter C. Marzio Award for Outstanding Research in Latin American and Latino Art was awarded to Rodrigo Cañete for the text he submitted. Shortly after the announcement of the award, both the ICAA and the Award Jury were informed about other writings by Mr. Cañete that are incompatible with the rules of use in our institution. Under these circumstances, the award has been rescinded.”

The “other writings of Mr. Cañete” to which the Houston Museum refers are the posts that the art critic has been making on his blog LoveArtNotPeople since 2012, which have become the buzz of the art world for commenting without mincing words on the private lives of artists, critics, gallerists, and other members of the community. Something that both the institution and the numerous cultural associations that complained seems to them to be an “ethical” attack incompatible with receiving a prize and they describe the website as a “platform for bullying”.

However, there is no one who hasn’t read it, at least to find out what the vapid critic has to say about them.

Although the ICAA foundation admits that its aim is to “provide professional projection to the remarkable contributions made by Latin American and Latinx artists” and that it does not tolerate disrespect “be it abusive and excessive language or discrimination in any form”, Rodrigo Cañete perceives what happened as a boycott against him and as “lynching by white bourgeois women with too much free time and all paid for by the state”, he told Infobae without mincing his words.

The critic also assured that “Argentina is a very damaged country, but the spectator refuses to see it. That’s why the Argentinean art that generally triumphs is that prepared, as a coiffeur, for the public that doesn’t want to see it”.

Nosotras Proponemos, one of the associations that requested that Cañete’s award be withdrawn, explained that the reason is “his hatred towards women, trans and older adults, his racism and fatphobia, the bullying campaigns, harassment, psychological and moral harassment.”

Meanwhile, the Argentinean Association of Art Critics (AACA) argued that beyond the quality of his work, “our concern points to the legitimisation that an award of this nature, granted by a prestigious institution, attributes to a person who publicly and systematically pronounces himself by exercising symbolic violence towards artists and colleagues”.

Argentinian critic Florencia Battiti, vice-president of the AACA, rejected in declarations to Infobae that they wanted to cancel the critic – “he can continue writing”, she said – and appealed to the ethics of the profession and the need for practices such as those of Cañetes and his virulent comments not to be legitimized on a global level.

Rodrigo Cañete was undersecretary of Cultures during the government of Eduardo Dulhalte in Argentina, in 2002, and also advisor to collectors, former art dealer for Morgan Stanley in London, where he lives, and has just published Historia a contrapelo del arte argentino (Sudamericana).

We have worked weekly with Mr Cañete for more than three years and we can testify to his actions — while an unapologetically unfiltered critic, he is unfailingly respectful, kind and well intentioned. He is by no means racist, chauvinist, transphobic, or anything else of which he has been accused.�In this country (USA) everyone is innocent until proven guilty. Your institution has decided to reverse the law and has declared Mr. Cañete guilty without even asking him to defend his position. The question here is not if Mr. Canñete , a mestizo latino born in Argentina, is racist but if your institution is. �We believe you owe the american people an explanation on this topic.�As practicing Latin American artists well versed in the LatinAmerican art world we can only surmise that the attacks on Cañete are both spurious and ill-intentioned. The Argentine art circuit is well known for its obscene level of corruption and nepotism — a perfunctory google search reveals as much. �Mr. Cañete’s only ‘fault,’ then, has been to shine a spotlight on these unethical practices, and subsequently, he has made many enemies in Argentina’s ruling and politically connected cultural class. �Mr. Cañete has been openly and viciously attacked for trying to expose this corruption.�By rescinding the Peter C. Marzio Award for Outstanding Research in Latin America and Latino Art, the ICAA is unwittingly aiding the corrupt Argentine governmental and other private institutions in their quest against Mr. Cañete�It is unfathomable to think and deeply painful to us to accept that an American Institution of high prestige such as the ICAA will allow itself to unwittingly become a puppet of a foreign power. We remain distraught by this decision and baffled as to the motives behind it.

As Latino Artists of Argentine origin we unequivocally dispute the allegations against Mr. Cañete Not only are is is the content of the claims against Mr. Cañete factually incorrect – taking statements out of context in order to manipulate and alter Mr. Cañete’s narrative, but even worse, the allegations are so baseless and disingenuous that the only purpose one can discern is an intent to do nothing less than destroy his career. ��Rodrigo Cañete, is a cultural critic and public intellectual of unique import — he uses his blog as a performance piece and as a tool for cultural and social critique, including but limited to the purpose of exposing the corruption in the art circles of Argentina. ��Cañete writes in Spanish. He deploys the language in plain and direct ways; his use of idioms and his cynical descriptions of people, entities and government functionaries is often impolite Were Cañete to bother with niceties he would in fact betray to point on cultural critique Indeed, his work demands clarity, directness and the ability to point out fallacies as well as what he perceives to be the destruction of Argentine culture at large. 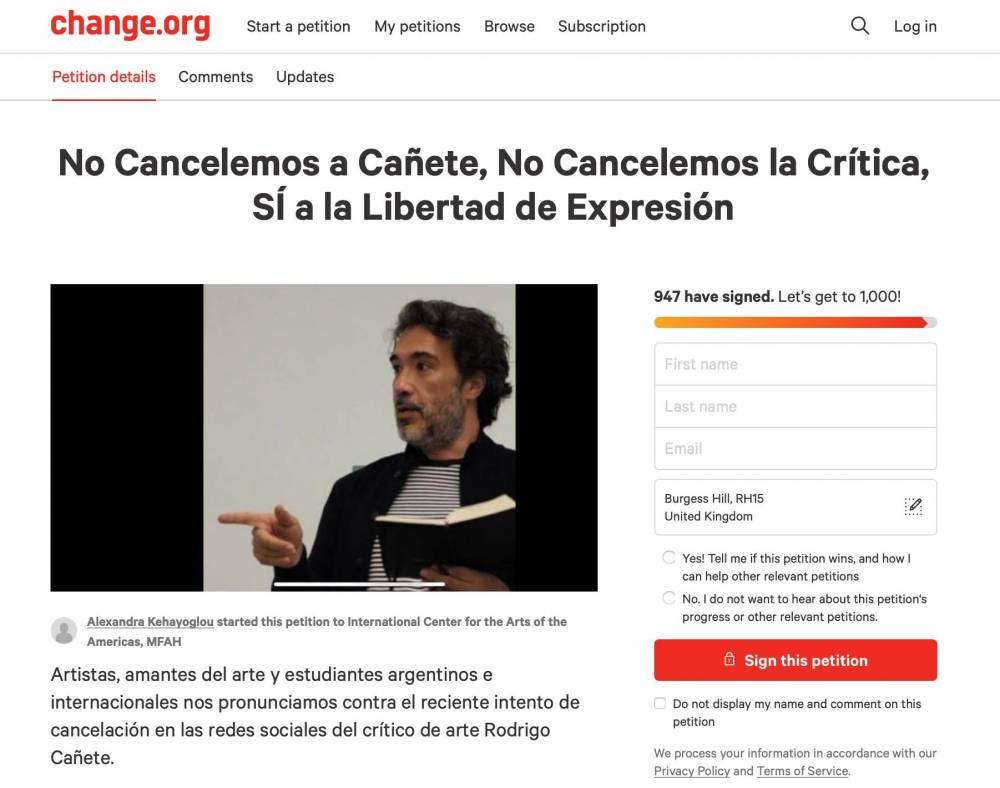 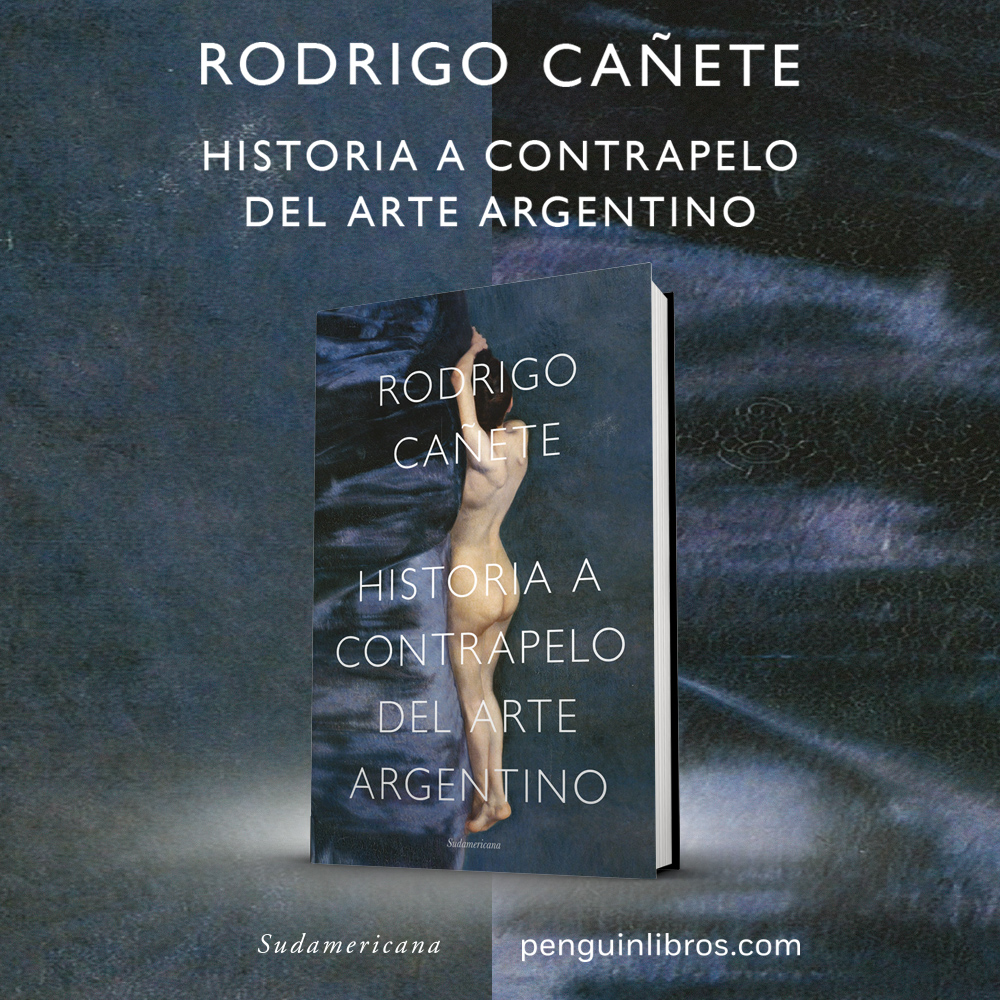